How Developing a Personal Brand on LinkedIn Translates to Business Results 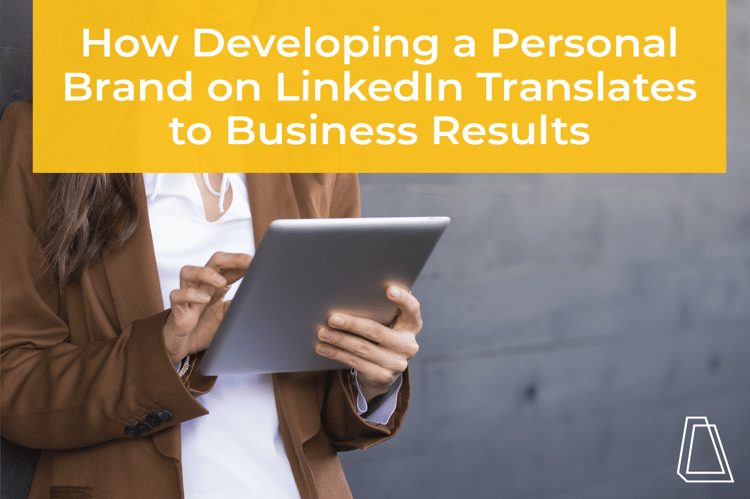 As entrepreneurs, we’re often told how important it is to build a personal brand online. In theory, it sounds great to set yourself apart with a unique brand, but what are the tangible business results of doing so?

As it turns out, by developing my personal brand on LinkedIn, I massively increased traffic to Accelity’s LinkedIn page and our website, generated dozens of new prospects and made some seriously awesome new connections.

About 10 months ago, I started creating videos on LinkedIn. At Accelity, we dabbled with video in the past, but personal branding was completely new to me. Instead of standing with perfect posture in front of a whiteboard and spouting off (clearly scripted) inbound marketing knowledge, I began creating more casual videos just talking about the parts of business I know and love.

Instead of focusing on selling or Accelity, I wanted to focus on bringing serious value to my audience.

On a personal note: shortly after starting to create videos on LinkedIn, I went through a divorce. At the time, I *so* wished I had waited to start creating videos so that changing my last name on my profile wouldn’t be an ordeal (or noticed at all). Instead of getting caught up in what people might assume, I decided to put it all out in the open.

I made a video discussing my name change and shared it to LinkedIn. That video received hundreds of thousands of views and comments. I was pretty nervous about sharing such a personal event on the internet (especially LinkedIn! What is this, Facebook? I know. I heard it a lot.), and I got tons of negative comments. Actually, I had to remove LinkedIn from my phone for a few days because some of the comments were very personal and hard to deal with. On the flip side, though, the majority of comments and messages I got were super positive, and there were a lot of people going through the exact same thing as me.

This video was a large catalyst of my growth on the platform. After publishing, I continued to create more videos, establishing myself as a subject matter expert in marketing, business, management and entrepreneurship. Through these consistent posts and regular interaction, I grew my audience immensely over the next few months (it’s now over 20,000 followers! Pretty cool stuff.).

Growing my social audience was a great ego boost, sure, but that doesn’t make a business case for continuing to spend time and dollars on these videos. What did justify the investment was the new leads I was generating for Accelity. By putting myself out there and talking about my life, people get to know me, reach out if they think they’re a fit to work with us and the sales process moves lightning fast. By the time these LinkedIn prospects started visiting Accelity’s website or reaching out to me, they were already warm leads.

Engaging with the community

Not only have I learned a ton, I now have a sounding board for discussing new ideas, I get to support others in their goals by sharing my experiences, and I’ve spoken at some really awesome events, too!

Connecting human to human on LinkedIn is definitely the highlight of the end of 2018 and 2019 so far for me.

Getting the team bought-in

After seeing success on my own page, it only made sense to loop the rest of #TeamAccelity. At the beginning of the year, I asked the whole Accelity team to publish 6 videos in Q1.

Most of the team was less than impressed by my request. They were apprehensive about putting themselves out there (as I was at first!). It wasn’t long before much of the team saw the value in creating on the platform and every single member of the Accelity team created at least 6 videos during Q1.

A major highlight here was one team member’s very first video hitting over 700,000 views and comments—she massively grew her network, and we got some leads, too!

Ultimately, the team decided that video might not be the best fit for everyone, but no matter what we should all be creating on the platform. This built the team’s confidence and helped them grow their own networks.

While our whole team was posting in Q1 2019, traffic to Accelity’s LinkedIn page increased 4x and our website traffic went up 144%.

We created a showcase page for our company culture where we share content about our team as well as the content our team creates on LinkedIn. All of these efforts are contributing to continued increases in traffic to our website.

Those could all be considered vanity metrics, though (which, if you watch my LinkedIn videos, you know that cold hard cash is the only number I really care about). The real reason I advocate for developing a personal brand is this: we’ve generated 30+ new prospect meetings, landed 3 new clients and generated nearly $300,000 in ARR.

If you’re ready to drive the same results for your B2B company, download our comprehensive resource on using LinkedIn to generate leads.