A Dash of Creativity, A Sprinkle of Pico de Gallo and a Bundle of Sass. Meet Abby! 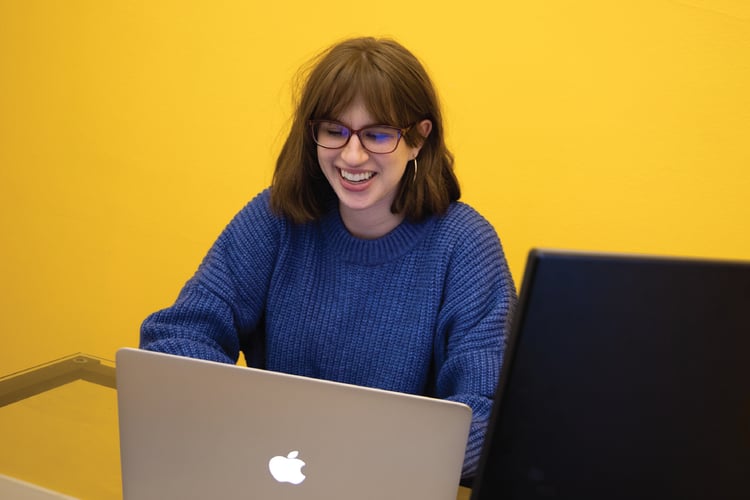 Follow the yellow brick road to meet the wizards behind the curtain at Accelity! We might not practice magic, but we can make content appear in the blink of an eye. In this blog series, we will feature one of our talented team members so you can see what we are all about. This month's star is Abby Bruckner!

How do I choose one thing? I can't. So I'll choose three:

2. Success in our failures. We treat errors as an opportunity to grow and improve, and I’ve never felt more capable and empowered to learn.

3. All the different hats I wear. Because we are a growing business, I get to do so much more as a graphic designer than I would in a lot of other spaces. I get to be a social media planner, a front-end web developer, a video editor, a photographer and everything in between. It’s so much fun.

What is something you would like to see in Milwaukee?

Though murals and outdoor art are on the upswing, I want it done more and I want it done collaboratively. Getting people to work together in creating something is a great way to form a sense of unity and belonging. Community art also offers a way to cross the “neighborhood barrier” and presents an opportunity to close the segregation gap that’s so prevalent in Milwaukee, even if just by a little.

What is your hometown known most for?

Making a Murderer’s Steven Avery. “I’m from a small town near the Manitowoc area.” I used to say exactly that when people would ask where I’m from. Due to the plethora of reactions that reveal they’ve seen the hit Netflix “documentary,” I now say that I live in a small town an hour south of Green Bay.

If you could meet one dead famous person who would it be?

Robin Williams, without hesitation. I cried. I actually cried when he died. A lot.

If you were mayor for a day, what would you do?

Hold a citywide bake-off so I can judge and eat all the breads, pastries and desserts. (See answer to Q6 to discover the root of this decision.)

If Accelity was a comedic movie or TV show, what do you think it would be?

I’m changing the word “comedic” to “reality” so that I can say The Great British Baking Show (because I’m obsessed with it even though I’m a terrible baker). GBBS features a small-ish, talented group of people  (like our growing team). The contestants help one another even when they’re focused on perfecting their own bakes. The bakers all love and support one another. There are many homemade baked goods. Lots of bad jokes.

It’s not so secret to my coworkers, but making Pico de Gallo is my secret talent. It seems like an easy task, but there are so many little things that can improve a Pico. I might be biased, but I actually make the best Pico I’ve ever had.