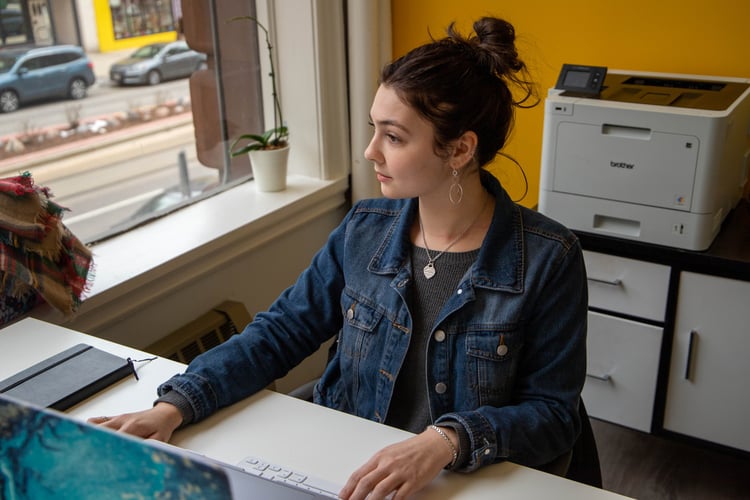 Follow the yellow brick road to meet the wizards behind the curtain at Accelity! We might not practice magic, but we can make content appear in the blink of an eye. In this blog series, we will feature one of our talented team members so you can see what we are all about. This month's star is Tess Nyary!

The people, hands down. I might be biased … Ok, I’m definitely biased, but Accelity boasts some of the kindest, coolest, and hard-working folk in Milwaukee. Also, we have office snacks and an official “Barketing” Director, Oliver, who is the sweetest pup.

If Accelity was a comedic movie or TV show, what do you think it would be?

As cliche as it sounds, Accelity reminds me of The Office in that all of the employees have their own personality and there’s always some shenanigan or good-natured teasing going on to keep things entertaining.

If a friend/colleague were to bump into you in public, where would you most likely be?

I’m a big homebody, but if anyone were to bump into me outside of work I’d be in one of two places: My favorite coffee shop, The Buzz Cafe, or Target.

I adore coffee and The Buzz serves up one of the best cups of joe I’ve ever had. They have a talented gang of baristas and are a wholesale partner of Pilcrow Coffee Roasters - a winning combo. More often than not, you can find me at a table glued to my laptop, headphones in jamming to some classical music, while enjoying a coconut milk latte.

Like many Millenials, I may or may not have an unhealthy obsession with Target. In my defense, how could you not?! They have everything you need! I could browse for days and never get bored.

If you could meet one dead famous person who would it be?

I’m going to let me inner Economics nerd flag fly for a second and say Vilfredo Pareto. Pareto is best known for his concept of Pareto Optimality, an Economic Theory which describes a Pareto-Optimal allocation of resources is achieved when it is not possible to make anyone better off without making someone else worse off. My Intermediate Microeconomic Theory course in college focused heavily on this concept and I always found it really interesting. I would love to pick his brain for an hour ... or three.

What drew you to Accelity?

I was first introduced to Accelity when my friend Cass came on to be one of their kick-butt copywriters. I followed her journey at Accelity and became a fan of the company, the culture they have cultivated, and that they are a woman-owned business. When it was getting close to my college graduation, I reached out to see if they were hiring and here we are.

If a tourist came up to you on the side of the street and asked you what they should do/where they should go in Milwaukee what would you tell them?

I’m fairly new to Milwaukee, however, I do have a couple of spots I would recommend to tourists and residents alike:

What is your guilty pleasure tv/music/movie?

I wouldn’t say I feel guilty about this, but I really like classical music. Nothing gets me calmer and more relaxed then listening to Tchaikovsky or Mozart. It’s my go-to playlist for work or a long drive.